This kusoge will give you chest pains

I don’t have much stake in the Alien series. I watched Alien, then I watched Aliens, and then I stopped there. Everyone says it gets terrible starting with the third movie, so why ruin what was great? I did the same thing with Robocop and The Godfather. It’s great to have the foresight to discard the bad and just enjoy the influential good. I didn’t buy into the hype with Aliens: Colonial Marines.

I don’t even remember if I saw the original “vertical slice” gameplay demo. The edge of my seat was vacant for the full seven years of its development. It just landed, and I got to see the spectacle. The lashing it received. The dirt that was dug up on it. It was juicy! So let’s relive that. 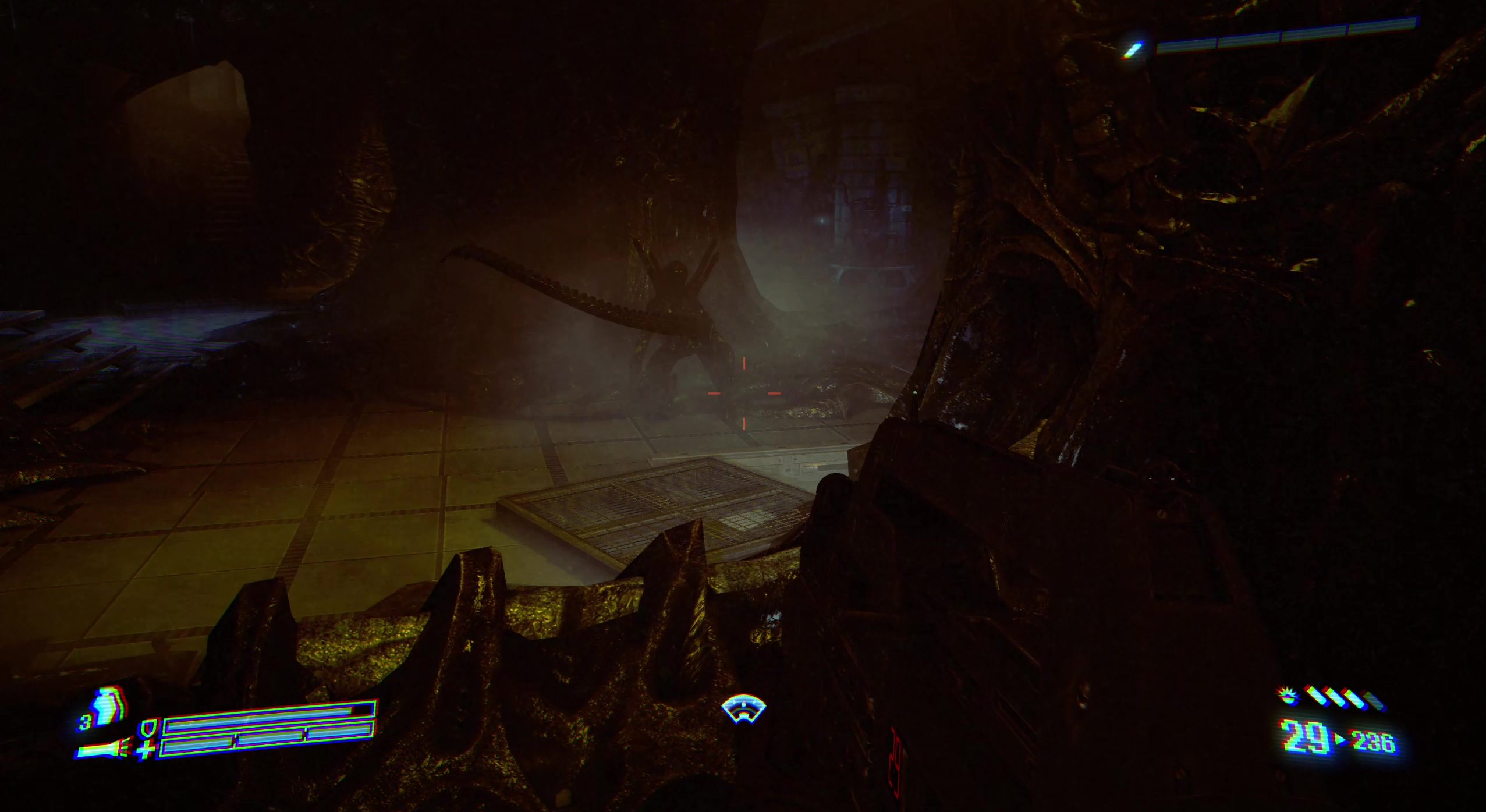 It’s important to note that I didn’t play Colonial Marines at launch. I’m playing it years after when it’s been patched a whole bunch on PC with fancy things like SSAO. While I’m going to get to the fact that it still isn’t super great, its current state probably does have something to do with me not being seriously offended by it.

Colonial Marines is the offensive story of how Alien 3 did happen, but not how it was told in the movie. I guess Sigourney Weaver’s amazing jawline, half an android, and a child were ejected into space at some point between movies, but now the Sulaco is back orbiting LV-426 for some reason and it’s emitting a distress signal. The Sephora, packed to the brim with marines, arrives to investigate and finds everything infested with xenomorphs.

It’s absolutely stupid. If you want to pull a reset on Alien 3, grab a spine and just retcon it. If you want Dwayne back in your fanfiction, there are ways to do it without insulting our intelligence. Look at The Godfather, then don’t look at The Godfather. Instead, look at Scarface: The World is Yours which needed to tell an untellable story, so it just did it anyway.

I want to spoil more because the plot just gets more contrived and stupid as it goes on, but I’m sure you’re just itching you play it and want to go in as blind as possible. So, I digress. 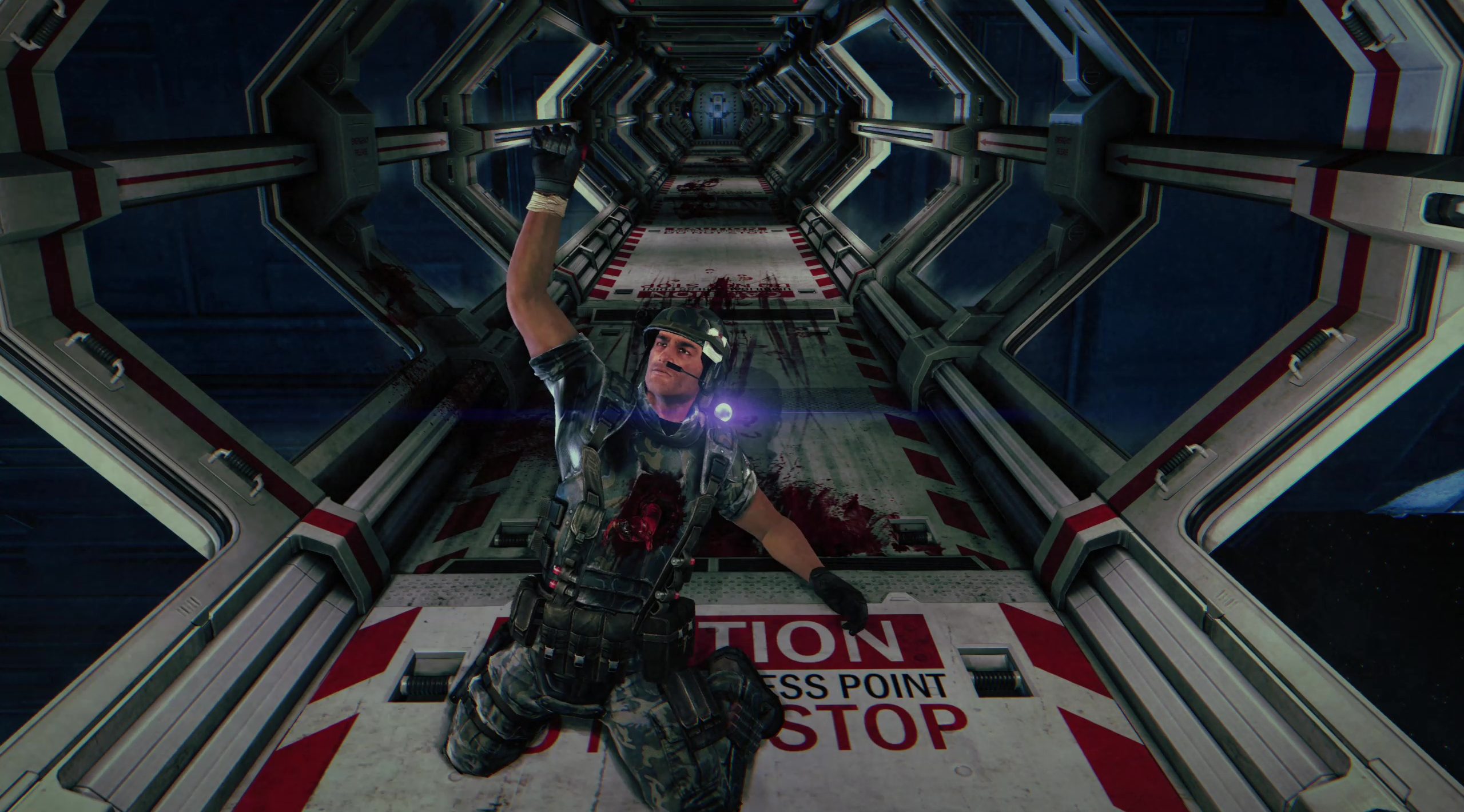 The game doesn’t actually start off that badly. You’re a marine sent aboard the Sulaco to see what happened to the last marine team that went in. Guess what? Aliens! Apparently, Weyland-Yutani arrived way earlier than your militant ass and got back to doing what they do best: screwing with powers beyond their control.

It starts off suspensefully enough, even though you damn well know what is going on. Your default speed is walking, and you just creep through derelict corridors saying, “Oh! I know this setpiece from Aliens!” You have a motion tracker, which I’d swear was jury-rigged in the first movie and wasn’t supposed to be something everyone carries around, and it is useful exactly zero times. Just like in the movie! You’re given a pulse rifle and a bunch of other useless weapons that are not the pulse rifle. It’s time for a bug hunt! 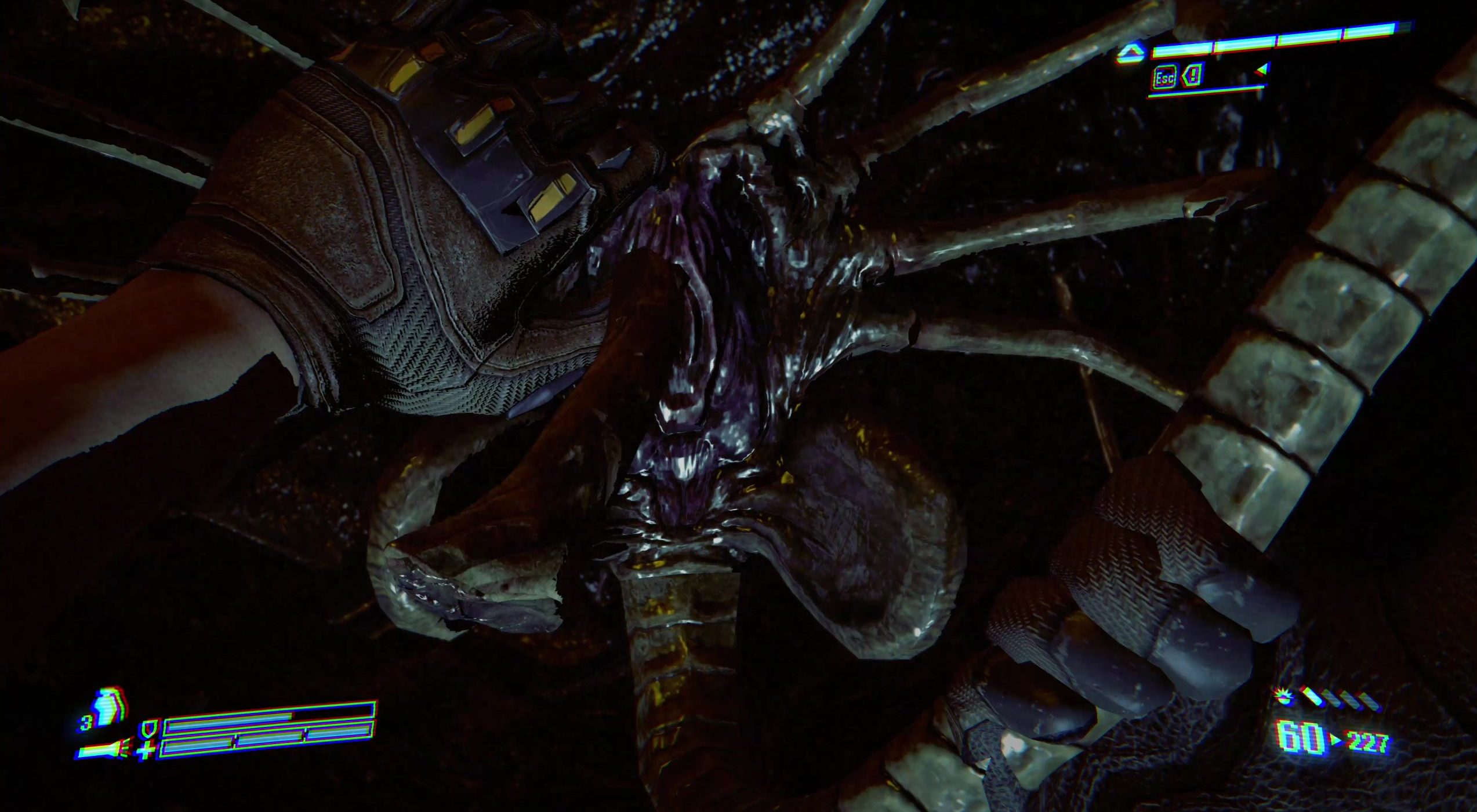 Weren’t the Colonial Marines already Weyland-Yutani’s private army? You wind up fighting against the evil corporation’s PMC because apparently, one army isn’t evil enough. It makes sense, every human in the game is as daft as a freshly mowed lawn. Their attempts at flanking are laughable and their willingness to leave cover to just toddle across the battlefield is always entertaining. Your own teammates are a riot, as well. They don’t care. They’ll stand in the middle of the action and just spray the odd blast of bullets at whatever comes near.

Not that the xenomorph AI is any better. The first one you’re introduced to in the game just sat still for me, squatting on the ground. It let me walk right up and shoot it in the back of the head. Not the best first impression.

Really, though, they do their job. They crawl on walls and pop out of vents in a way that can make them a bit more difficult to target. They mostly still just mob you, but the bar is set pretty low by the humans. 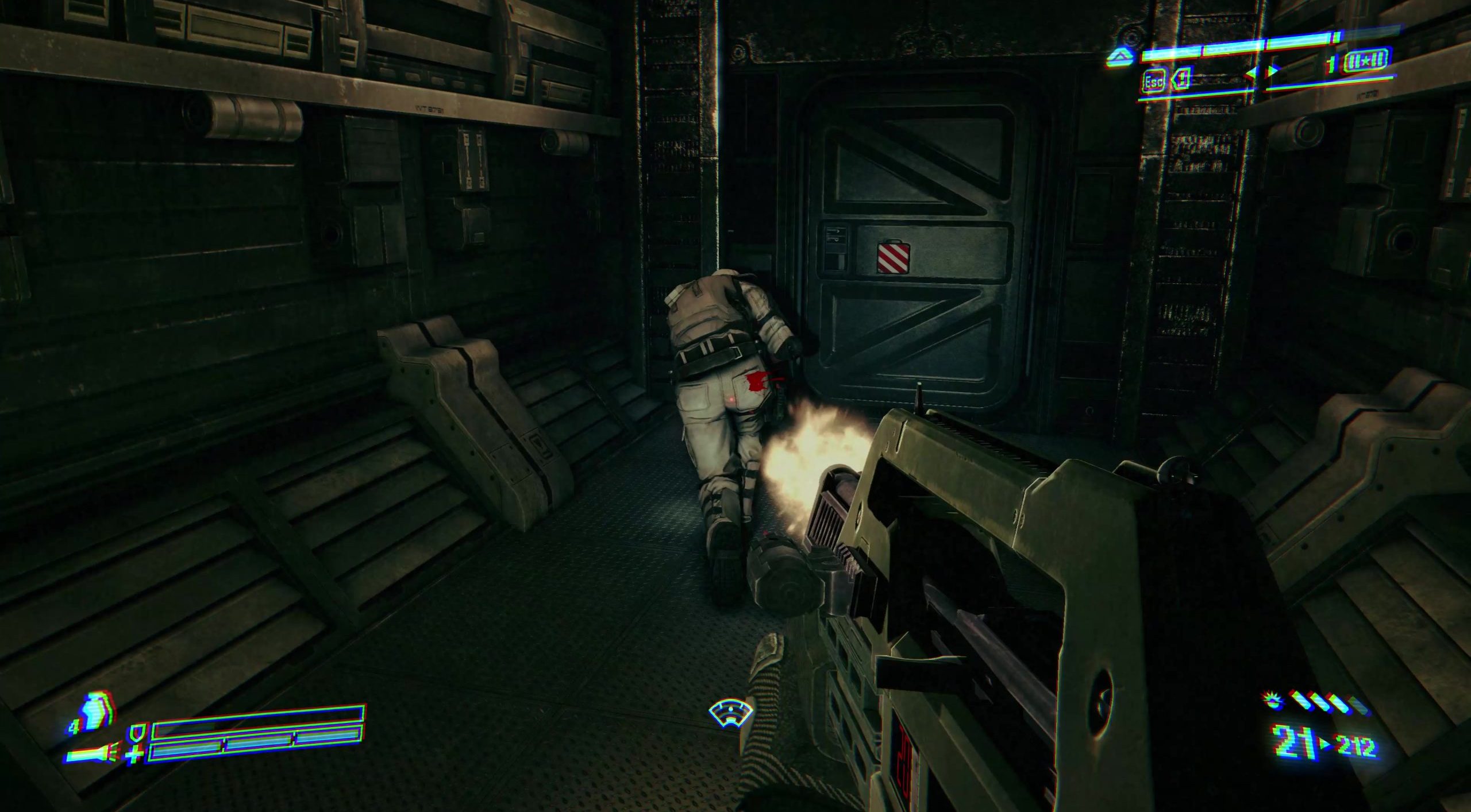 It’s just so damned underwhelming. The best ideas Colonial Marines has are just wholesale lifted from Aliens. You start on the Sulaco. Then head down to Hadley’s Hope. Again, visit that mummified alien in that old spaceship. Who are you trying to impress, Colonial Marines? I’ve done this before in video games that made more sense, it isn’t new or interesting.

While sightseeing, you enjoy some of the drabbest and boring shooting imaginable. The environments all have the same themes: blue-grey corridors, craggy outdoors, more blue-grey corridors. I know that Alien was basically the first to employ these sorts of environments, but I’m going to say the same thing I do about every boring environment: throw down a damned rug. Where’s the coffee station? Where’s the break room? Someone hang a painting of God-Emperor Weyland. 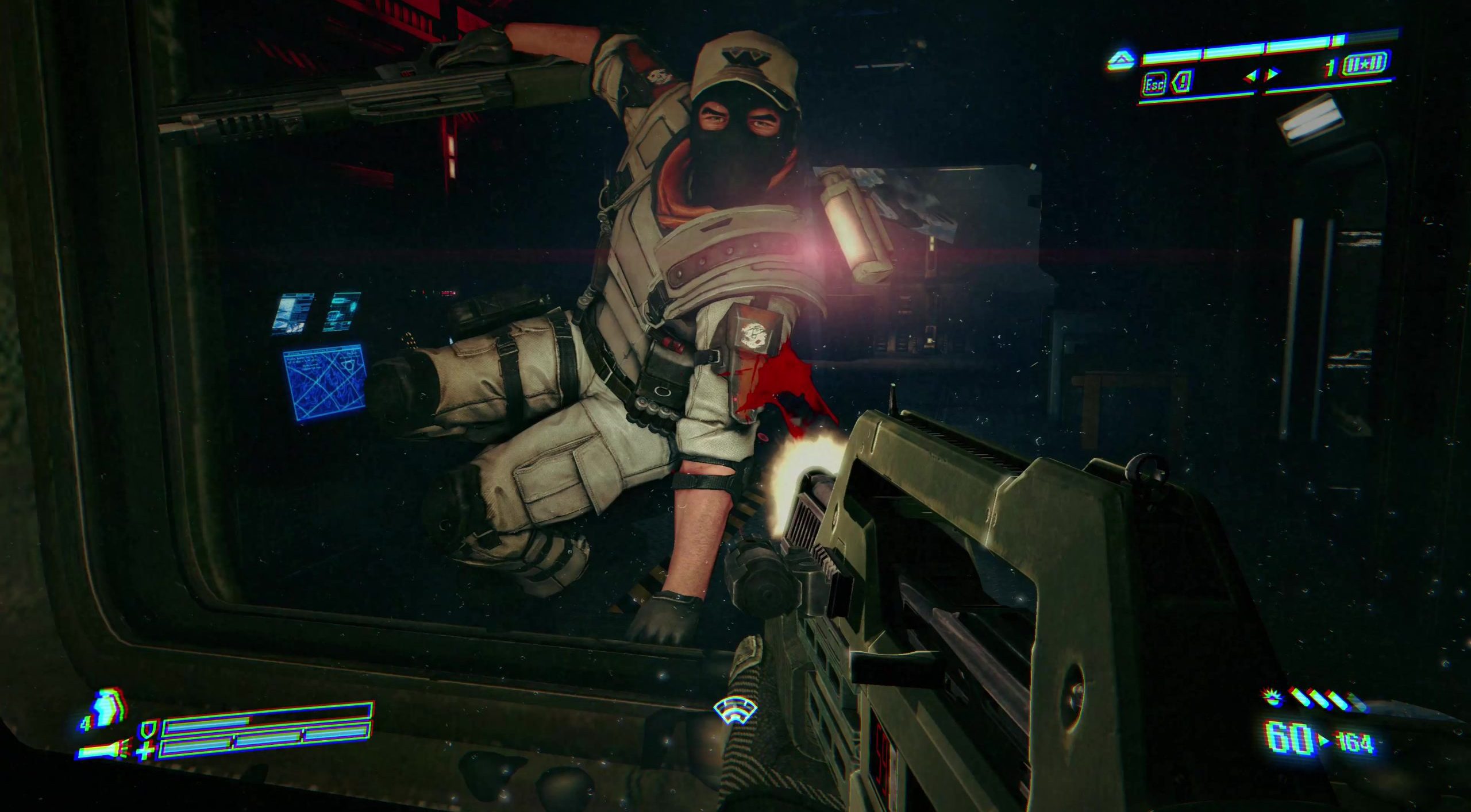 But the worst sin isn’t even that it’s so damned boring and uninspired; it’s how the publisher and developers acted about Colonial Marines leading to release. Sega got the Alien license and gave it to Gearbox who slacked off on their work to create Borderlands. When that succeeded, they sure weren’t going back to licensed games, so they shunted all the work over to Timegate Studios who had previously done Section 8: Prejudice. Like, all the work was given to them. Gearbox had done practically nothing. So they built this game while getting approval on everything from Gearbox and Sega.

Meanwhile, they had to make a demo for E3 2011. They built it on high-end workstations knowing full well that it would never run on consoles at the time. It was a “target” but Randy Pitchford of Gearbox presented it as a “vertical slice” of gameplay. He insisted that it was running in real-time, even though it plainly wasn’t.

Timegate Studios passed their work off to Gearbox to get it to actually work on consoles, and then things get muddy. Gearbox says Timegate handed them a mess and that they had to rescue the project over the next 9 months, Timegate says at least 50% of their work was kept. Sega says Gearbox had breached their contract and spent development money on Borderlands. Gearbox said Randy Pitchford sunk his personal finances in finishing the game. They also said Sega wanted to make the game more like Call of Duty, and that’s why there’s Weyland-Yutani PMCs. Michael Biehn said that everyone on the project was passionless.

That last part is pretty evident in the final product. Everything else is just a lot of finger-pointing; accusations of who pooped on the floor. Or perhaps it’s more accurate to say: who the most floor poop belongs to. 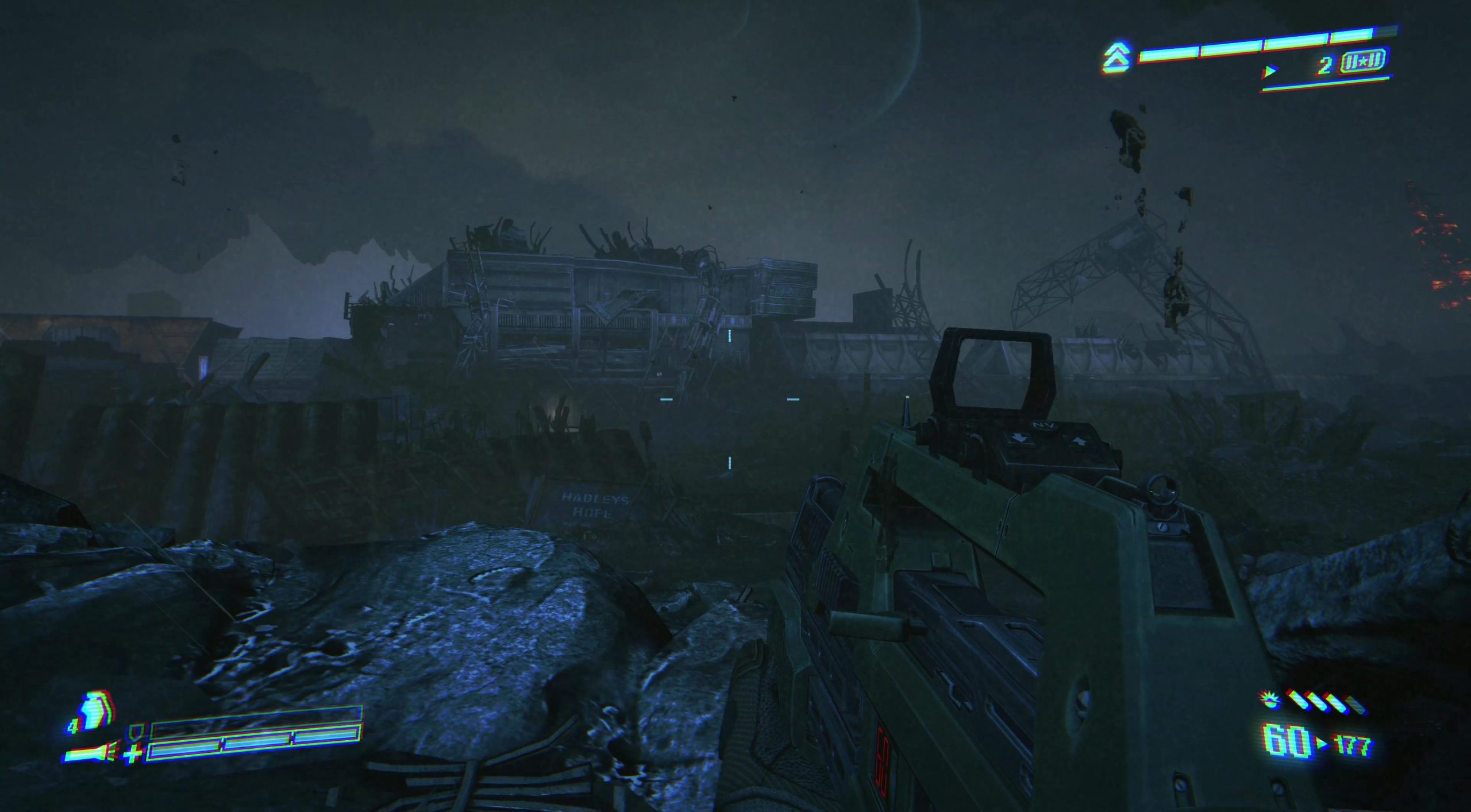 It would be hilarious, but people bought Colonial Marines, full-priced, expecting they were getting what they were promised. Instead, they got an incredible mess containing publisher overreach, brazen laziness, and lots of lying.

Nowadays, the game isn’t super great, but it’s playable. It feels more soulless than maliciously bad. I’m actually more upset that it became so high profile when it mostly just deserves a spot in the sun-bleached bargain bin next to Turok (2008). It sold over a million copies and its widespread notoriety probably hurt the sales of Alien: Isolation, a much better game that the people developing it actually cared about.

So, seriously, screw this blue-grey, boring-ass game about oorah hero marines fighting the bad corporation that owns them. Burying it isn’t even enough to wipe away its sins. We need to nuke it from orbit. It’s the only way.

Zoey is a gadabout gaming hobbyist. She’s been playing video games all her life and is a lover of both new and retro games. She enjoys digging in the dirt and picking out the games that are perfectly fine if you clean them up a bit.