Get Packed: Fully Loaded achievements are “packed full of references and inside jokes” – TrueAchievements

Couch co-op removals game Get Packed: Fully Loaded heads to Xbox One on July 29th, so we spoke to Moonshine Studios co-founder Jamie K. King about the challenges of developing a physics-based removal game, the eviction of Ditchlington, and an achievement list “packed full of references and inside jokes.”
In Get Packed: Fully Loaded, the town of Ditchlington has just been bought by the Industrial Salt Corporation, meaning everybody is being forced to pack up and move out. “You take the role of Last Ditch Removals, a company initially created to take advantage of the mass evictions,” explains King. “However, as the Last Ditch crew begins to see the damage that the Industrial Salt Corporation is causing to their town, they decide to fight back using their newly found packing skills.” Just as the kitchens of Overcooked! become more and more impractical, naturally, in Get Packed: Fully Loaded, we’ll be packing in increasingly-hectic conditions, flinging belongings about pell-mell, and probably being more of a hindrance than a help. “I’m personally looking forward to seeing player reactions to Stage 5 where we introduce a bunch of extra crazy mechanics such as teleportation and low gravity,” King adds. Get Packed: Fully Loaded is set against a 90s backdrop, and King explains that this was partly to boost that sense of destructive packing satisfaction. “We wanted to pick an era where technology was big and bulky, but environments would still be relatable to lots of players, so the 90s felt like the natural fit. Flinging a CRT TV across the room is much more satisfying than a paper-thin OLED.”

According to King, one of the biggest challenges in developing Get Packed: Fully Loaded was balancing “performance, physics stability, and chaotic gameplay. We wanted the world we built to be driven by physics interactions and behaviours but also feel lived in with lots of small environmental details,” he adds. “The more objects we added, and the greater the accuracy of physics collisions were, the harder it hit the game’s performance. With so many moving parts, it made sending all that data across the network an even greater challenge, especially when we had to take latency and network stability issues into account.” Get Packed initially launched for Stadia, and it took another few months to ensure the game was optimised for all the platforms it’s now set to launch on, but King explains that fewer changes were needed from a design perspective, since Get Packed was “always intended to be played with a controller.” 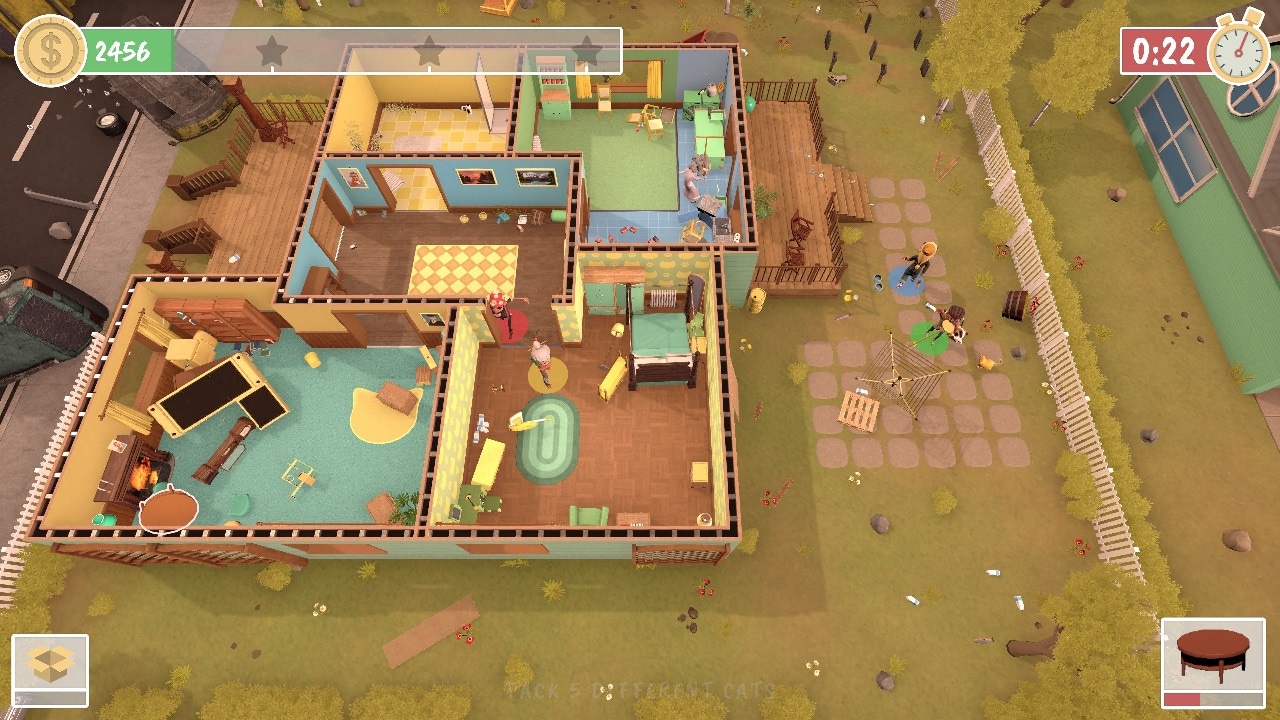 We don’t yet have the full Get Packed: Fully Loaded achievement list, but we do have a few hints. “We had a lot of fun designing the achievements, they are packed full of references and inside jokes,” King explains. “Of course, we still have the standard ‘Completed level X’ achievements, but we also wanted to include unusual and challenging objectives for the players. One of my personal favourites is ‘Packing Bad’ which requires the player to throw a pizza on top of their van.” Most achievements can be unlocked in solo play, but you’ll need extra players for a few others. “If you can find a good team, players can probably knock out the cooperative achievements and challenges in an hour or so. We also have an online matchmaker system, so you will always be able to find other players looking for teammates,” King adds. As for replayability, King tells us that there’s a whole load of in-game challenges to keep us coming back.

What do you think? Will you be picking up Get Packed: Fully Loaded on July 29th for some physics-based removal chaos? Let us know in the comments!