Super Heavy Booster 3 set to fire up for the first time – NASASpaceFlight.com – NASASpaceflight.com

Following a rigorous test campaign with the Starship prototype vehicles, SpaceX has turned its immediate attention to the booster that will loft its interplanetary spacecraft to new heights.

Booster 3, the first prototype Super Heavy to roll to the launch site, is set to conduct a three-engine Static Fire test as early as Monday. The testing at the suborbital site will clear the path for Booster 4 – already being stacked in the High Bay – to take up residence at the Orbital Launch Site (OLS), an area that continues to undergo preparations, including the installation of the final section of the Launch Integration Tower.

Following a July 1 rollout down Highway 4 for installation on suborbital Pad A, Super Heavy’s pad flow has already included all the preparations required ahead of a Static Fire test.

This ranged from an ambient proof test with nitrogen gas on July 8 ahead of cryoproofing with LN2 on July 12. The latter provided some stunning first-time views of the huge booster’s controlled venting.

The installation of the Raptors was staggered, with one installed ahead of the cryoproofing, followed by the other two after the test. The three Raptors are RC57, 59, and 62.

With the pre-firing tests proving successful, there was a slight delay to the expected Static Fire test initially expected last week based on alert notices to local residents such as NSF’s Mary (@bocachicagal).

With Elon Musk noting “Probably Monday,” the latest alert notice received by Mary aligns, with a test window ranging from noon through to 10 pm, local time.

Booster 3 will provide a first-time operation for fueling the huge booster with Liquid Oxygen (LOX) and Liquid Methane (CH4) during the test. How much propellant will be loaded, and the schedule for the sequence is unknown. However, NSF’s Adrian Beil wrote a feature on the expectations based on previous experiences with Starship being applied to Super Heavy.

Based on those evaluations, it is expected that Super Heavy will also undergo a Starship-like countdown of 45-60 minutes, with fueling beginning in the 30-40 minute range. Engine chill would then follow at T-12 minutes, ahead of the firing.

As with previous Static Fires, the T-10 minute siren will sound, as per the alert notice to local residents. However, as with Starship, mini-holds can be expected, pushing the ignition time to the right.

Once SpaceX completes Booster 3 testing to its satisfaction, its fate is not yet clear. After that, it will be removed from Pad A and rolled back to the Production Site, potentially joining Ship 15 and 16, with the tantalizing potential of the display vehicles being used as a backdrop to Musk’s long-awaited update presentation. 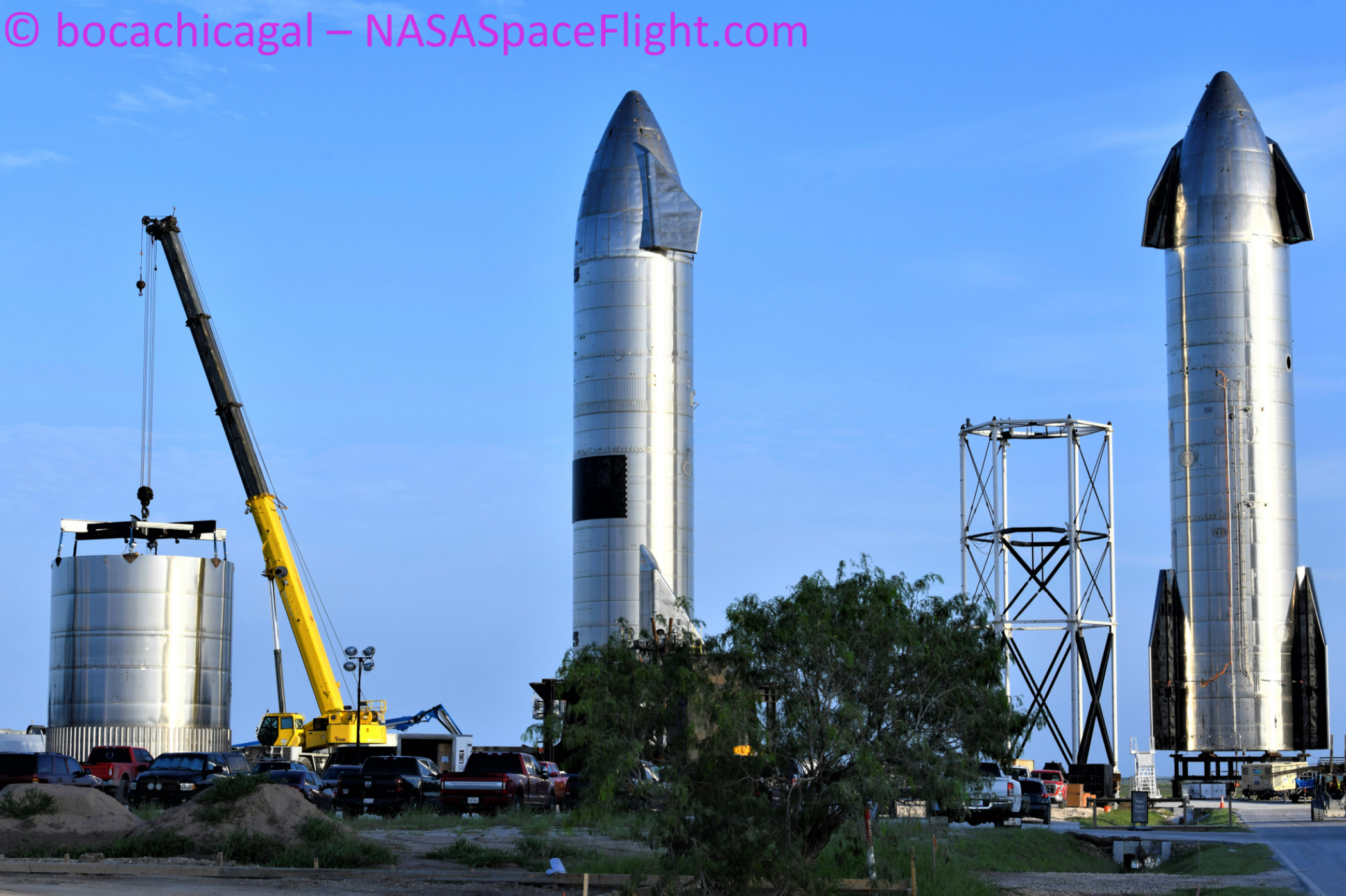 The focus will have already moved to Booster 4, which is currently set to launch the orbital test mission.

However, while that launch is still at least a few months away, stacking of the B4 sections has already begun in the High Bay.

Additional sections have already been staged outside the production tents, including BN4 AFT 4 and 5, while the impressive Thrust Puck for Booster 5 has already arrived at SpaceX Starbase.

The staging of hardware has aided the notable production cadence at the Boca Chica site well before assembly. This continues to be the situation for the booster side of production.

The key element for launching missions with the integrated Super Heavy and Starship stack is the Orbital Launch Site (OLS), which remains a hive of activity.

The focus over recent weeks has been raising the sections to complete the Launch Integration Tower, which received its eighth and final major section element on Sunday.

Interestingly, there remain some pieces of the launch tower back at the Production Site that may yet be used to give shape to the top of the tower and house some technical equipment.

Work on the Tank Farm for the OLS has mostly been focused on rolling cryo shells out to the site, ahead of the installation on the GSE (Ground Support Equipment) tanks.

The OLS will host the first integrated Super Heavy and Starship stack, with Ship 20 currently set to be the first to be mated with a booster.

The vehicle is undergoing stacking operations inside the Mid Bay, following the usual path for Starship production flow, ahead of receiving its nosecone inside the High Bay.

As expected, the sections are covered in TPS (Thermal Protection System) tiles on the windward side, tasked with protecting the vehicle during re-entry.

While the installation of TPS tile patches has been observed on numerous prototypes, the full array of tiles will be debuted with Ship 20.

This includes the area of the aero surfaces, with a curved installation of TPS observed on an aft flap at the Production Site.

Again following the impressive production cadence routine of SpaceX Starbase, sections for Starship Ship 21 have already been spotted by Mary (@bocachicagal), as the lack of hops has not resulted in a slow down in shipbuilding.

All these future vehicles require engines, lots of them. While Raptors have been arriving into Starbase with increasing frequency, supplying the opening salvo of orbital Super Heavy and Starships will require hundreds of flight engines.

The bulk will be for the boosters, with Super Heavy’s opening 29-engine configuration eventually evolving to a 33-engines on the aft.

According to Musk, the final thrust will be around 230 tons per engine, with the outer ring being non-gimbal engines and the inner ones providing the steering for launch and landing. This engine setup will mean that the final thrust of the booster will be 74.4MN, which is more than double that of the Saturn V’s thrust of 35.1MN.

Musk appraised a “very accurate” render by artist Erc X, notably showing the increased-Raptor config would have three central Raptors, with ten in the middle ring, accompanied by a default twenty on the outer ring.

Further confirmation was received in the differences between sea-level Raptors, with the outer ring Raptor Boost (RB) being without Thrust Vector Control infrastructure compared to the Raptor Center (RC) of the middle and inner-ring, along with no differences in thrust between RB and RC variants as originally anticipated.

The current supply line for Raptors involves production at SpaceX HQ in Hawthorne, California – before being test-fired at SpaceX’s test site in McGregor, Texas. They then make a short road trip in the “RaptorVan” to Starbase.

However, Musk noted a new Raptor factory would be built at the McGregor site to cater to the increasing demand for Raptors.

It appears groundbreaking may have already begun, with a new large patch of ground being cleared, as spotted by NSF’s Gary Blair in photos provided to L2 McGregor. 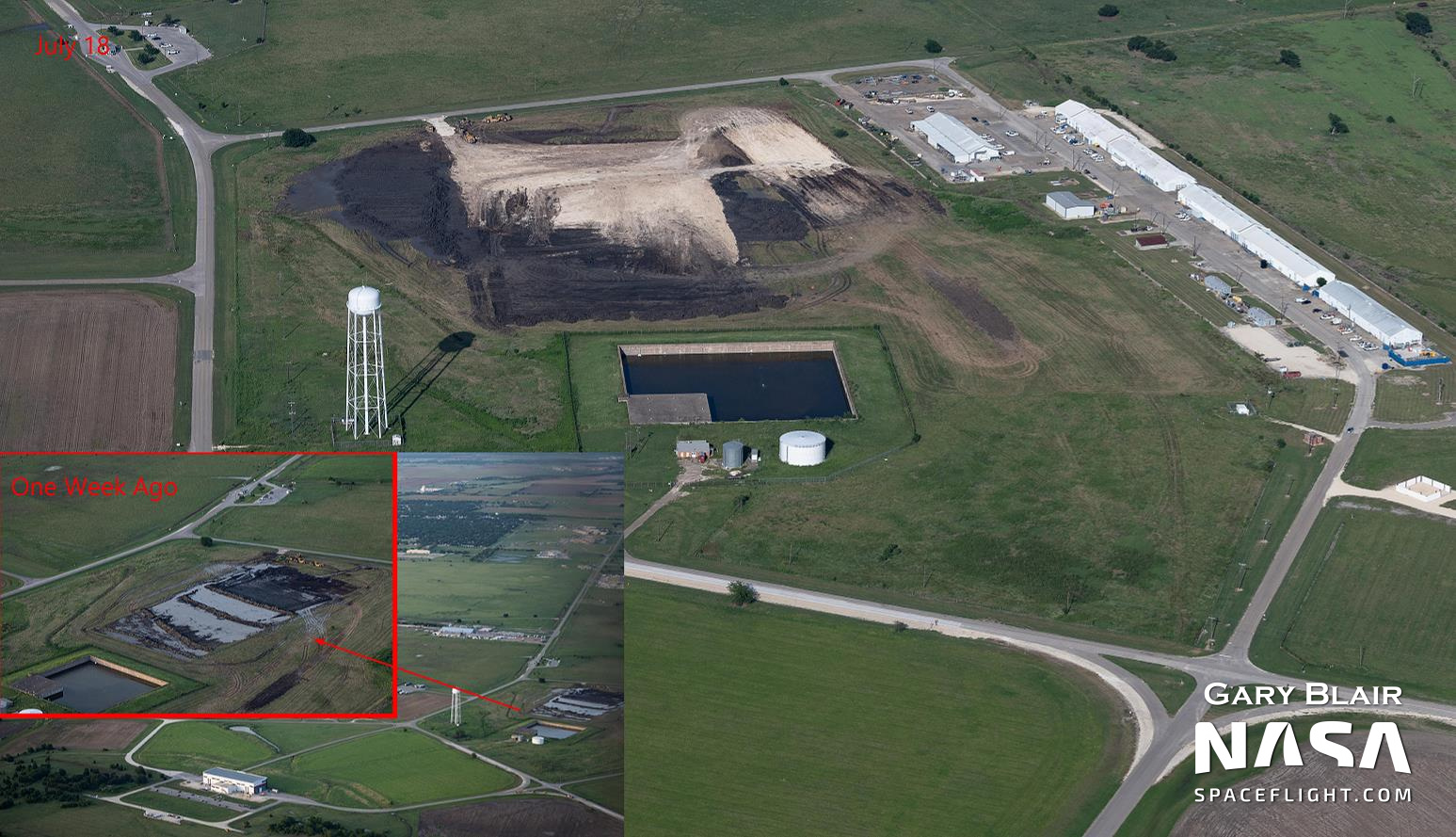 Work over the space of a week at a potential Raptor Factory construction spot at SpaceX McGregor via NSF’s Gary Blair.

With the recent competition of two extra test bays for Raptor, taking the total to five, having Raptors built and tested at the same Texas site, just a few hours drive from Boca Chica will greatly increase the supply of engines required for SpaceX’s ambitious launch schedule for its Starship program.

With a production goal of 2-4 engines per day, the new McGregor factory will focus on the updated version of Raptor called “Raptor 2.” In addition, Hawthorne would focus on building Raptor Vacuum (RVac) and “new, experimental designs.”

Grab some cool gear along with the ability to support our content: https://shop.nasaspaceflight.com/