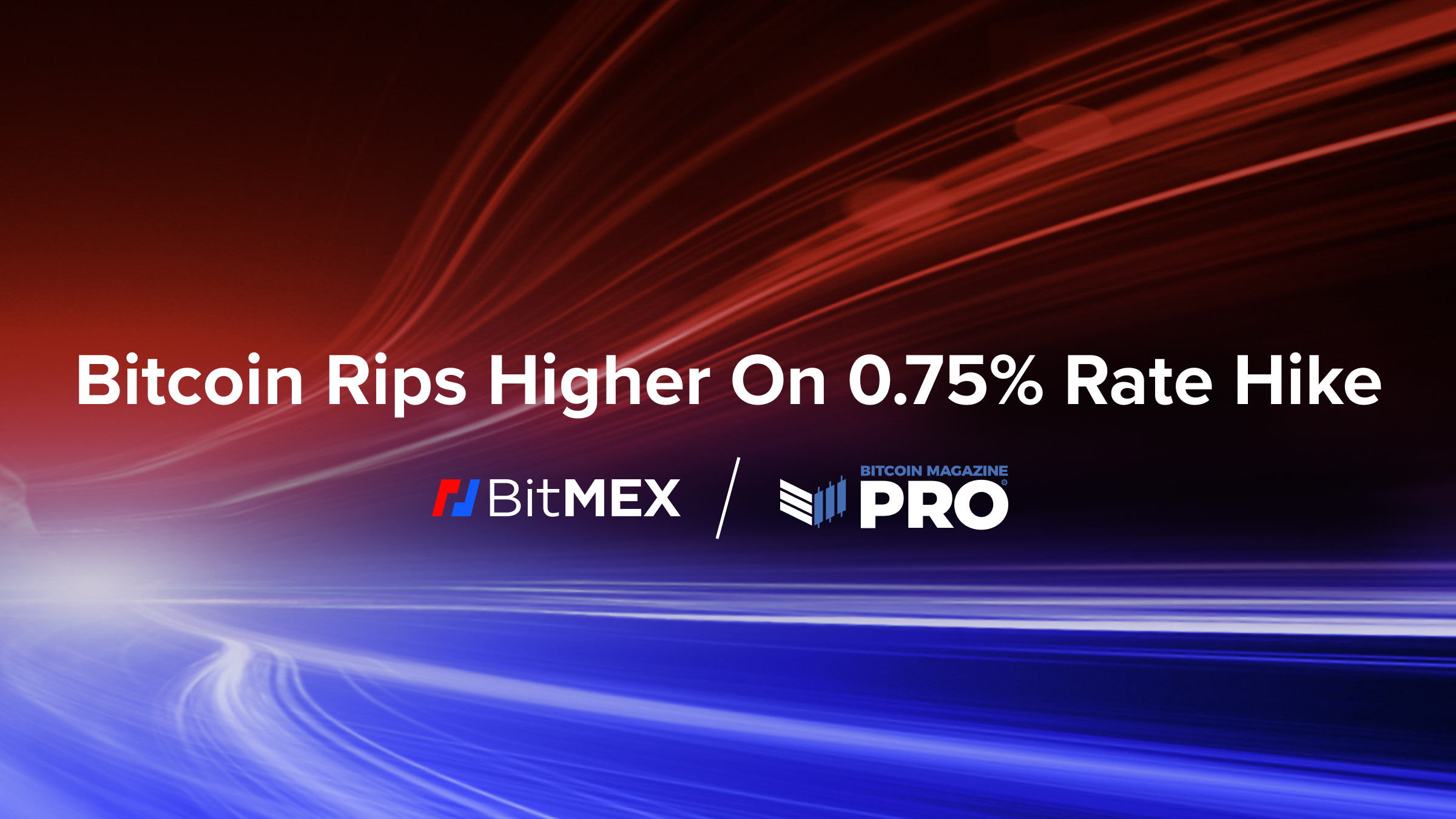 This article is part of our new series of crypto research content, produced by the Bitcoin Magazine team and sponsored by BitMEX. To learn more about our wide-ranging partnership with Bitcoin Magazine, click here.

On 28 July 2022, the Federal Reserve went through with another 75-bp rate hike. This was broadly expected going into the meeting, with the market assigning a 76.3% probability of a 75-bp hike one hour prior to the meeting, with a (previously) 23.7% chance of a 100-bp (1.0%) rate hike taking place. After the meeting and press conference, the latest market data puts the most favorable odds on 100 bps of hiking left to do by the end of the year, across three more Federal Open Market Committee (FOMC) meetings.

If you haven’t yet signed up for a BitMEX account, you can do so here. Going into the meeting, assets such as equities and bitcoin were moving up in tandem, as the expectation of a dovish and neutral Fed relative to prior meetings increased investors’ appetite for risk. Focusing on bitcoin specifically, sizable positions could be seen being taken in the derivatives market before the 2:00pm EDT announcement, with a large TWAP (time-weighted average price) bot clearly visible in the open interest data. Some big $BTC bulls on FTX going into FOMC pic.twitter.com/CWAE0BxGKZ

With the large TWAP position presumably opening up longs, heading into the meeting there was a noticeable skew in the liquidation levels for long/short positions for the two biggest assets in the crypto market, leaving shorts particularly vulnerable. Let’s return to the FOMC meeting and the comments made by Powell. Here are some of the most notable comments throughout the course of the press conference:

The comments from Powell that were particularly notable were the abandonment of Fed forward guidance in the form of future rate hikes, which is a shift from prior Fed meetings. This action gives the Fed the flexibility to pivot if/when needed in the future, which was obviously a positive sign for markets over the short term.

Looking further forward from beyond today’s meeting, the old adage of “Don’t Fight the Fed” still holds true, and despite the more bullish outcome being chosen today (a 75-bp hike rather than a 100-bp hike), the result for financial market conditions is still net tightening, which will likely take some time to be felt by markets.

The regime over the previous decade as inflation remained extremely low was one of “buy the dip.” While inflation is this elevated, the Fed’s dual mandate necessitates action, and with year-over-year readings still close to double digits in the United States, Fed watchers instead are in a “sell the rip” mentality.

Long-term investors and more active risk managers alike would do best to assess the probability of an all-time bottom being set in place for equities and crypto markets, or rather if this is yet another bear market rally.

In a previous issue, Caution: Bear Market Rallies, we covered the dynamics of bear market rallies in both equity markets and in bitcoin to provide our readers with historical context.

For readers looking for more on the state of the markets and the global economic outlook, Bitcoin Magazine’s upcoming July Monthly Report will go into much more extensive detail on the interplay of geopolitics, monetary policy and financial markets. The report will be released to paying subscribers this following Monday.

To be the first to know about our contracts, new listings, product launches, and giveaways, you can connect with us on Discord, Telegram, and Twitter. We encourage you to follow our blog and subscribe to the Bitcoin Magazine Pro newsletter.

In the meantime, if you have any questions please contact Support.