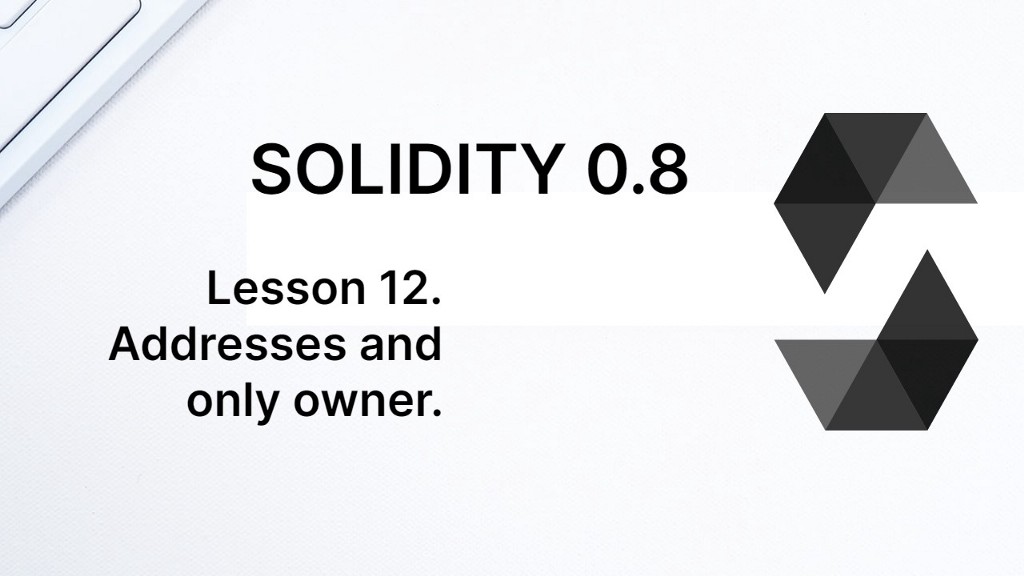 We’ve already seen several types in Solidity, such as uint and strings. Now let’s see a new and very important type: The address. Addresses represent accounts on the blockchain and are therefore widely used.

In the code below, we declare a variable of type address through its literal. The prefix 0x indicates that this is a hexadecimal number.

There is another type of address in Solidity, the address payable. It is possible, in a contract, to send base coin to a certain address, however, for this purpose, that address must be of the payable type.

To declare an address as payable, just use the keyword payable, as follows.

Even if we do not declare an address payable, it is possible to send base currency to it. To do this, you need to cast the variable as payable. We will see this in a next lesson.

Let us now understand a little better about Ethereum accounts.

Ethereum has two types of accounts: the so-called Externally Owned Accounts (EOA) and contract accounts. Both are designated by an address, but there are major differences between them.

I’ve said several times that accounts on Ethereum are public/private key pairs, but that only goes for EOA. Contract accounts do not have private or public keys.

Why that? Because contracts don’t have to sign anything. Contracts are not capable of initiating transactions, they only react to transactions. This means that nobody owns a contract; once placed on the blockchain, it is public and anyone can interact with it. If the creator wants privileges within the contract, that privilege needs to be explicitly programmed into the contract code. We’ll see how.

Contracts are accounts because, like external accounts, they have a balance in the base coin, that is, they can hold Ether. In fact, contract accounts have 4 pieces of information stored on the blockchain.

The bytecode is the contract code, so it must be stored on the blockchain, as well as the contract state variables. The fact that contracts have a balance indicates that we can send Ether to such accounts. But there is a difference: we need to write functions, in the contract, that allow the withdrawal of such Ether. As contracts do not have private keys, they cannot willingly send Ether. Contracts have no will of their own.

It is important to remember that contracts do not initiate transactions.

EOAs only have the first two data fields: the balance and the nonce. They have neither a bytecode nor state variables.

Let’s remember that our last contract was responsible for storing a will on the blockchain. Did you notice that it has a major security flaw? Anyone can invoke the public functions of the contract, and change the amount each heir would receive. A malicious heir, for example, could invoke the function and increase its inheritable amount.

As I said, if the one who wrote the contract wants privileges within the contract, he/she needs to program that into the code. That’s what we’ll do in this section.

To start, let’s declare a state variable of type address, named owner. Add the following line of code to the contract, outside of any function.

This creates a new state variable. This variable will store the address of its owner, who will have special privileges. For example, we will require that, in order to change the amount each heir is due, the transaction must be signed by the owner.

Within the contract, it is possible to have access to the address of the account that submitted the transaction. For this, the sender property of the global variable msg is used, as follows.

There is a subtlety in using msg.sender because it is possible for contracts to invoke functions in other contracts, so msg.sender does not always indicate who initiated the transaction. We’ll see that later, we don’t need to worry now.

Now we need to require that the address that sent the transaction that invokes the function addHeir is the same as the owner of the contract. This is done as in the statement below.

The statement is very explanatory and does exactly what we intended. With that, we solved our problem. Let’s see what the new function addHeir looks like.

When invoked, the first thing the function does is check if the msg.sender is the same address as the owner. If so, the transaction proceeds. Otherwise, the transaction reverts (rolls back).

When a transaction reverts, it does not cause any changes to the state of the blockchain. Basically, the function invoked will have no effect.

This is a “Only Owner” strategy, where only the owner of the contract is able to make certain functions take effect. Anyone can invoke this function, but if they don’t have the owner’s address private key, the invocation will just be a waste of gas fee. It will revert and have no effect.

At deploy time, the contract invokes a special function, which is executed only at that time. It cannot be invoked later. Such a function is called a constructor, and must be declared as follows.

In our contract, the constructor does not use any parameters, it just stores the address that made the transaction in the variable owner.

The contract is now complete. Below, we can see his full body.

I changed the visibility of the variable owner to public so that we can verify, in Remix, that it assumes the value of the address that deployed the contract.

In the figure blow, we see that the deploy was done by the address 0x5B3…eddC4.

Since the variable owner is public, we can retrieve its value. This is seen in the figure below.

As no function was written to change the variable owner, once its value is assigned, it will not be changed.

Also, if we try to invoke the function addHeir using any account other than 0x5B3…eddC4, the transaction will revert. This can be seen in the figure below.

Another way to assign the address of msg.sender to the variable owner would be to do it at the time of its declaration, as follows.

Thus, it would not be necessary to explicitly declare the constructor function. Both methods have the same result.

An example of a constant variable is as follows.

Declared this way, the variable MY_NUMBER will hold the value 42 and cannot be changed. In fact, it is not even correct to call MY_NUMBER a variable, as the blockchain does not allocate a dedicated space for it. The value of MY_NUMBER is written directly to the bytecode and is not a state variable.

In the previous example, since the variable owner will not change, can we declare it as constant? Can we make a statement like below?

Thus, the variable owner can be declared as immutable, but not as a constant. The sentence below is correct.

Attempting to change the variable owner at any time will generate a compiler error.

Comments and suggestions about this article are welcome.

Any contribution is welcome. www.buymeacoffee.com/jpmorais

Learn Solidity lesson 12. Addresses and only owner. was originally published in Coinmonks on Medium, where people are continuing the conversation by highlighting and responding to this story.