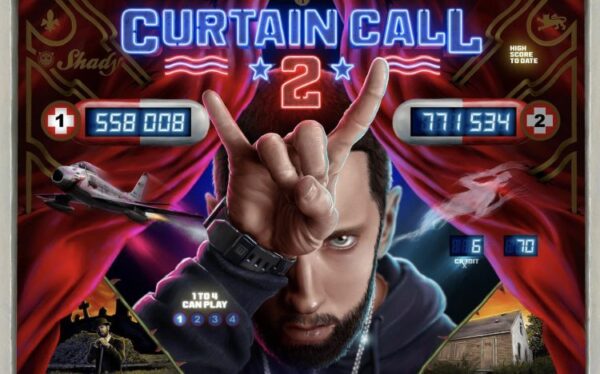 Eminem‘s 2005 greatest hits package, ‘Curtain Call: the Hits,’ is not only one of the best-selling compilation albums of all time, but – with a nearly 600-week run on the Billboard 200 to its credit – it sits in Billboard history books for the longest run of any Hip Hop project ever.

That set features some of Em’s greatest hits up that point including ‘The Real Slim Shady,’ ‘My Name Is,’ ‘Stan,’ ‘Lose Yourself,’ ‘Cleanin’ Out My Closet,’ and more.

To toast the mountain of smashes he’s accumulated in the time since, the 49-year-old is raising the curtain on ‘Curtain Call 2.’

In addition to the inclusion of fan favorites ‘Walk on Water’ (featuring Beyonce), ‘Godzilla’ (featuring Juice WRLD), ‘Love the Way You Lie’ (featuring Rihanna), ‘Not Afraid,’ and more, ‘Curtain Call 2’ shines with three new songs: three new songs; the Snoop Dogg-assisted ‘From the D,’ the CeeLo Green-assisted ‘King & I,’ and an unreleased 50 Cent collaboration from 2009 called ‘Is It Love,’

Hear it all inside.