Why Currency forward market is important? 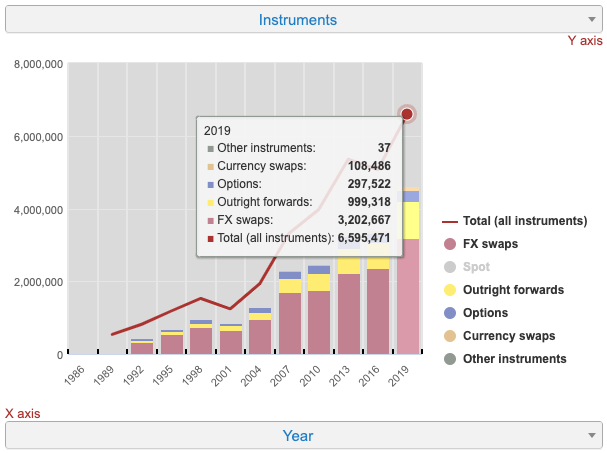 Point of view from a former Goldman FX and derivatives trader

I spend 14 years as an FX forward and derivative trader at Goldman Sachs, and another 3 years as Portfolio Manager at Hedge Fund before joining Secured Finance. I would like to share my view on the necessity of the FX hedging market and how it works.

More than 4,600 billion USD are traded across the currency hedging product on a daily basis

If you have never worked for a traditional financial company, you may not know how it operates and why it is so important to have the ‘Currency hedging market’. In fact, the size of this market is so enormous. According to the BIS triennial report, the daily average transaction volume in April 2019 was over 4,600 billion USD for the FX swaps, Outright forwards, Options, and Currency swaps which are the typical forward hedging instruments. The report also shows the rapid growth of the transaction volume which has more than tripled since 2004.

What drives such large transaction volumes?

We live in an age of satiation, where the borderless world is overflowing with goods and services. Global companies provide their products elsewhere by taking advantage of the different labor, resources, and funding costs between the countries. This all helps to enrich people’s lives.

For instance, Toyota sold 10.5 million cars globally in 2021 of which 80% were outside of Japan. However, Toyota can not keep the proceeds in the currency they earned since they pay dividends to shareholders and publish their earning report in their local currency of JPY.

These big global companies do not want to have currency fluctuation risks, so they convert back to their base currency in a timely manner. That is the reason for hedging demand rapidly increasing.

What is the “FX Forward”?

According to a paper from the International Swaps and Derivatives Association (ISDA), the foreign exchange forward contract (“FX Forward”) is an agreement to buy one currency against the delivery of another currency at a rate set on the trade date for settlement on a specified date in the future. You can hedge your future cash flow using this contract. For instance, Toyota has its sales projection in the United States for next month and they can set the contract to sell USD against JPY in a month based on the current theoretical price using FX Forward.

How I can get the theoretical rate of ‘FX Forward’?

How is the theoretical rate of the future FX determined? It depends on the non-arbitrage pricing theory. The future exchange rate will represent either currency you would choose to have the same economy.

This obviously depends on the Spot FX price but the more important factor will be the interest rate difference between the two countries.

Why is it important?

The currency market fluctuates day by day due to real economic demand and speculations. USDJPY can move more than 20% as we compare the current price to 1 year ago. You may gain an extra 20% to realize 120% of the total proceeds or lose part of your sales to 80% after converting to your own currency if you do not hedge anything. It is not easy to predict the FX direction hence companies operating globally or investing abroad tend to hedge their currency risk at least partially. ‘FX Forward’ is one of the common products for the currency hedge hence the trading demand keeps growing rapidly.

Finally, it is an individual’s view to hedge or unhedged FX risk, but it is good to know and have a hedging tool to protect your asset.

There is much bigger volatility in cryptocurrencies and it is even more critical to have a hedging tool. See you soon in the next article which I cover the way to hedge the currency risk in Crypto.

Why Currency forward market is important? was originally published in Coinmonks on Medium, where people are continuing the conversation by highlighting and responding to this story.