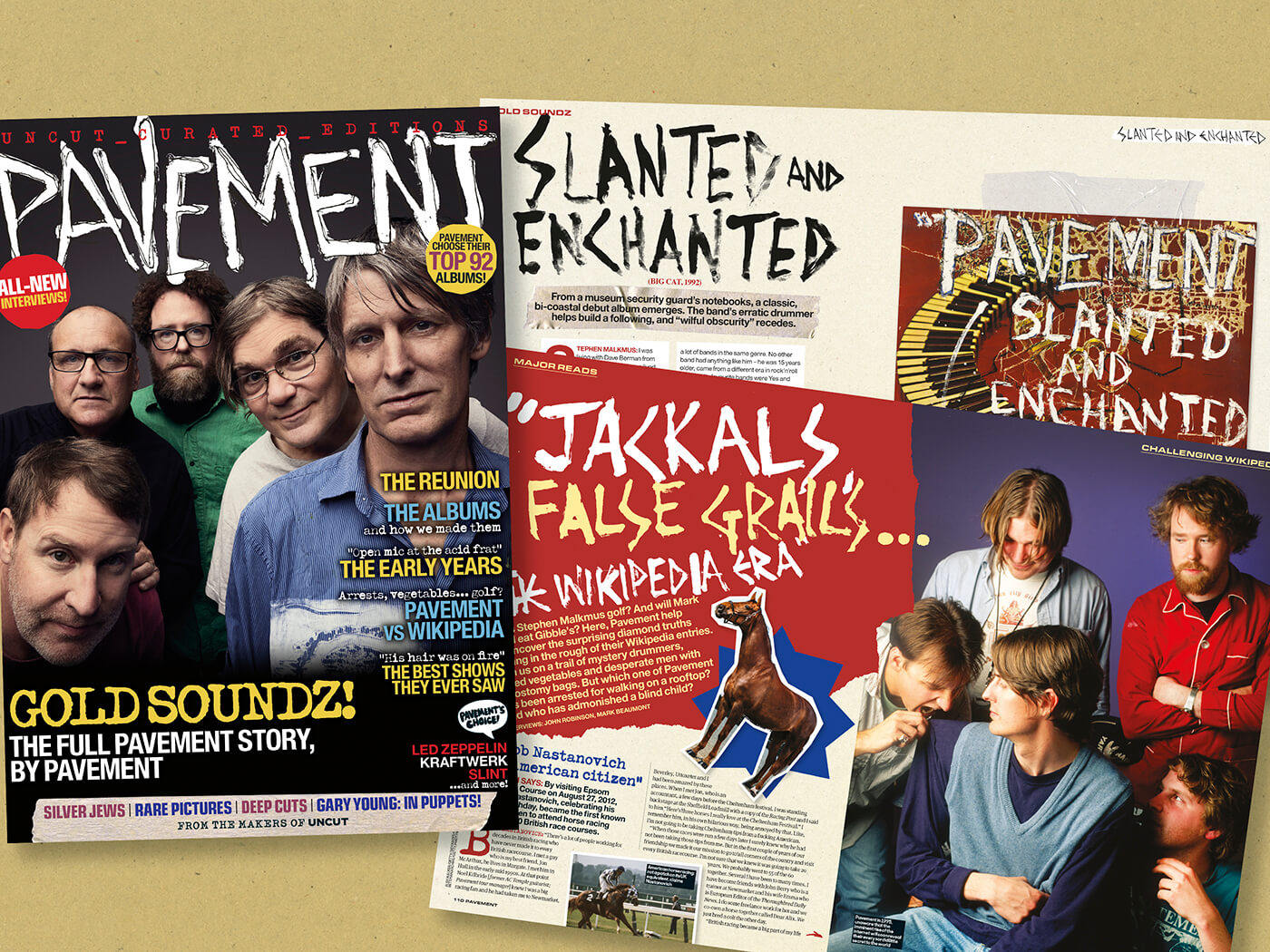 It’s a pleasure to introduce the latest of our Curated By…Editions, in which we invite a single artist to tell us, in depth, about their influences, their recordings – ultimately, about their life in music. This time around, it’s the turn of one of the world’s most unpredictable and best-loved bands: Pavement, now reconvened to play live for the first time in 12 years.

Each of the band’s members (and one prominent ex-member) has given us an idea of the music which was most influential on them, introducing features from our extensive archive of classic interviews. The band have also picked over the records nearest their stereos to choose (getting on for) 100 important albums in their lives.

It’s been illuminating. Not only that, in a series of far-ranging new interviews, the band have told us all about their current reunion, and spoken in detail about making the impressive, freewheeling catalogue of music which has brought it about. From their debut EP Slay Tracks 1933-1969 in 1989, to the grand and psychedelic Terror Twilight ten years later, here you’ll find the definitive history of their music – told in Pavement’s own words.

We’ve also made time to explore some lesser-known parts on the band’s story. We’ve tracked them across the globe from, Stockton, California in the 1970s and 80s to Hull, UK in the 1990s and all points in between, to join them at pivotal moments in their history. Along the way, we’ve unearthed rarely-seen photos – the Malkmus/Nastanovich/Berman house! – and important stories of key relationships. We’ve confronted them with the assertions on their Wikipedia pages (really, Stephen Malkmus?), and heard the tales of their most mind-blowing live music experiences. (Takeway: if you get the chance, try and tag along with Mark Ibold. You won’t be disappointed.)

What else? Well, we’ve seen Pavement’s latest live show and talked to them about it afterwards, selected 30 Pavement deep cuts we’d like to hear on tour, met Rebecca Cole, the latest addition to the Pavement family (“She’s a musician,” Bob Nastanovich tells us, “which makes her the second, possibly the third in the band”). We’ve talked to Steve Keene, sleeve artist of Wowee Zowee, tracked down Pavement’s first drummer Gary Young, and the people who are making a film about him – and heard about his part in the band’s story.

Not every 20-something band would have taken a chance on an alcoholic drummer who was as likely to be doing a headstand as keeping time on the next song. If they hadn’t, Pavement might have happened more efficiently, but it certainly wouldn’t have happened quite as in such an original way. “It was not quite like the British trope that you write an ad in NME and the right person turns up who’s into Bowie and the Velvet Underground,” says Stephen Malkmus. “We don’t have that.”

Instead, from inception to reunion, Pavement have been a band to break the mould. It’s been a pleasure working with them on the issue. I hope you enjoy it.

Buy a copy of the magazine here. Missed one in the series? Bundles are available at the same location…

Watch: Tau & the Drones of Praise – It is Right to Give Drones and Praise